I recently decided to start keeping a devlog of progress on my games. Here lies progress updates and various other information. Recently, I released Penimorta with my friend, Denis, on Steam.

Penimorta is nearing the end of its development cycle with 2-3 months left to go! Currently floors twenty through seven are completed (you are descending a tower twenty floors tall) with floors six through zero still to complete. Seven out of the ten bosses are also complete. The Steamstore page is up and wishlistable as well at: Penimorta on Steam. We're trying to make the theme of the game: "Don't take yourself too seriously". To achieve this we have started the game with a serious tone but allow it to slowly descend into a variety of funny items and bosses. The game has a linear story but you get a random item at the end of each floor. The items are all passive and synergize together to create unique gameplay for each player. A tier list I made of the items is below.

Penimorta is launching tomorrow morning! It took 9 months to create. There were some slow periods in the development cycle due to moving apartments, but it turned out well. In Penimorta you have infinite lives to beat a series of ten bosses. On each floor, the player acquires a random item from the selection below. This leads to each player having a unique experience in Penimorta. I think we ended up achieving the theme of "Don't take yourself too seriously" by making the items and bosses have hilarious dead-pan humor. We're excited to see the reception to the game, please try it and let us know what you think! Available on Steam April 30th 2021. 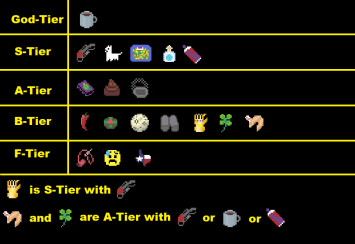 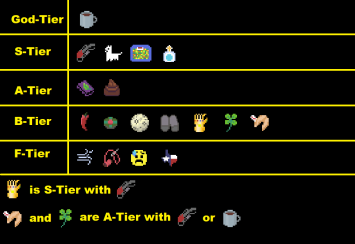